It does creep on.  Time.  Seems like there's plenty but I never seem to get enough done.  I'm just not as young as I used to be I guess.  Then again, it's only been 7 weeks since the first baby goat was born this year and I spent 4 weeks on unemployment, doing nothing major, just piddling and playing with the grandson, cooking, playing with a few soap recipes and watching the whole world go insane over nothing.  It has become perfectly clear how Hitler convinced Germany to accept socialism and murder 6 million Jews while attempting to take over the world.  Amazing (and a little scary) to watch.

I'm already back at my off farm job.  Plenty of co-workers freaked out and frightened over catching covid.  I am not afraid and I refuse to wear a mask of any kind.  Won't do it.  No reason to.  I find I am easily annoyed by others around me trying to convince me I need to be a frightened lemming like they are.  I saddens me how many people around me are sheep, not capable of thinking for themselves.

Worked on the garden before the rain came in.  I could smell it coming and it had already started to rain as I was covering my last row of bean seed.  I wanted to be planted already but I didn't want the couple of mid 30f nights to hurt any of it so I waited.  I have plenty of seedlings in the house that need to go out, just didn't get out of bed early enough today to get it done.  Too distracted by the 20 little projects I have on my list.  Maybe tomorrow before the grandson gets here if it's not pouring rain. 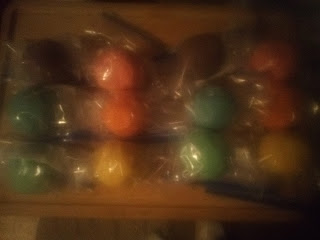 The camera lens on my phone is finally scratched up enough that it's no longer taking clear pictures.  Guess it's time to replace it.  The 2 batches of play-doh I made in anticipation of my grandson visiting me tomorrow.  One for him to play with and another to sell.  Completely edible altho I don't think after tasting it, any child would bother since it's pretty salty.

I haven't sold any babies yet, if the auction house opens up for June, I might if the price is good.  I'd rather keep them all than sell them cheap.  Besides, I'm perfectly capable of butchering for myself and goat is a fine meal.

Posted by mmpaints at 9:00 PM No comments: