So, here it is, half way thru May and what's going on around the farm? Time doesn't mean much around here since it's all so scheduled and in high demand. There's not much left over for deviation from the set routine. Out of bed every day, same time no matter how tired you are. Feed and milk, tend to small things that need done then head out to the off farm job. Rinse, repeat.

Critters are doing fair to middling, garden is coming along, no thanks to my old, good friend Ronnie, who spends more time sitting on a bucket than anything else. Even tried to get my son to turn some garden over for money to make it look like he did something. So much for all his big promises and such, all lip service and bullshit. Not really surprising since I seem to be constantly surrounded by people who think they want to be just like me but lack the stamina to keep up. Which, is just a polite way to say they're full of crap and too lazy to follow up. And, a no show today as well.

So, spring farm checklist- chicken coop-nope. Run the front fencing-nope. Build the new lean-to for the rabbits-nope. Turn the garden-nope. Well, kind of, that last one isn't a total no check mark, I did arrange for the corn patch to be tilled which it is. 3 days of rain in a row while I was working kept me from getting that patch planted. Rain on my first day off in 2 weeks put a damper on farm stuff but I still managed to hoe the tomato rows in the drizzle and weed both the strawberries and the asparagus. My great farm hand Ronnie doesn't seem to understand the importance of doing those things so I did it in the rain yesterday. I'll be planting corn today by myself. 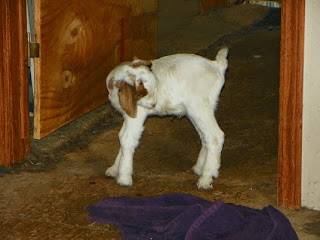 I've got 15 chicks in the brooder grow tank, they're 3 weeks old. 2 batches of meat rabbit kits, not sure how many are there tho. Just haven't messed with them yet. The calf is growing like crazy. Meatball, the boer goat orphan, is growing well. He's gotten over losing his only friend now. Hard hit for both of us. I sold a young billy to someone local and while delivering it, the herd went looking for the lost goat kid and Baby goats kid apparently got hit on the side road. They've never been out there before but the urge to find the missing kid must have been very strong. So, that was kind of a blow to the farm, sell one and lose one, cutting the sale price for the one in half. 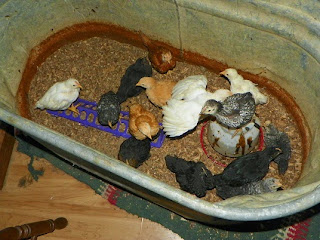 The work schedule really has me run down. No time to make cheese and I'm dumping almost all the milk I get from Goober cow. I'm at the point now of where I feel like I should just go ahead and sell her to someone who will use the milk. Before, the cost of the feed to keep her in good flesh while milking was worth it because of the cheese, cheese making classes, butter, yogurt, etc. Now, with my work schedule consuming all my time, all that milk is being dumped but the feed is still getting to the cow. Tough choice to make since Goober is such a big part of this little farm. With Lucky and Sis gone, there isn't much keeping me in the farming mood anymore.

Ah, I've left the most messed up art of my time away from the blog out! Roger George! Roger is a 50 something yr old man who lives local, works on the barges and likes to build old cars. Been hanging around for about a year, talking cars and such. Nice fellow, so I thought. Turns out, he and his wife split and he needed a room to rent for a few days. I made it clear there is just one rule on my farm, NO DRINKING. He obviously missed that and proceeded to get drunk and follow me around crying about how scared he was of being alone. Nope, this isn't going to work out. Out he went. Yup, end of that, right? Not hardly. It's been 3 months and he's got his friends all convinced there's some great romance going on between us, he's been rerouting his mail to my farm and telling his work he lives here on the farm. Never even a hug between us, no friendly peck on the cheek, nothing! He is so very not my type to start out with, quite round and bald. Nothing wrong with either, just not what interests me in a man. Apparently, in some peoples minds, not a chance in hell means someone loves you. 3 weeks ago, he got off the boat then he waited for me to go to work, broke in to my home and stole all my farm records, the journals, all of the printed blog. He said he thought he could hold it for ransom to work out a deal with me to stay here. Oh Yah, that worked out real well for him. I got my stuff back and he got a black eye. The guy is batshit nuts and borderline stalker material. I'm currently working on restraining orders. He's been on the boat for the past 3 weeks, we'll see what happens when he gets off it this time. He had better stay clear of me and the farm, I'm getting good at delivering black eyes to idiots.

So today has been a working day off. I've been working on finishing up the front garden, turning everything that's left because Ronnie simply can't do it and I can't wait that long. Turning a 2' by 3' section in a 5 hour day, sitting on a bucket and smoking just doesn't cut it. Times a wasting. I've already found close to a pack worth of cigarette butts out in the garden. Guess Ronnies idea of gardening is very different than mine is. I'm leaning toward working it out so he isn't out here anymore. Just don't have the time to deal with the bullshit. I'm getting another one of our mutual friends to come pick up and board Rons horse. He's used it as an excuse to keep coming out here but since he got out on January, he's not touched that horse. All the promises were dead air and I'll be damned if I'm gonna give him an escape or another excuse to sit around and do nothing.

Yep! Worked it out! Ronnie is gone. No more excuses. No more bullshit.

Now my thorn in the side is my disrespectful 21 yr old son. The things he's done to me this past year are amazing. The way he talks to me, wow. If I would ever has talked to my own parents that way, I'd still be in the hospital! Worse than that, he steals from me. Big blow up this past week, rudeness, disrespect and I've had enough. Yep, that's done. The man child will be taking care of himself from now on, the freeloading is over. Time to grow up and take responsibility for your own choices and your own stupid mistakes.

Now for some fun stuff! 3 orphan boer goats now live here. Bottles twice a day because the young lady who originally took them then sold them back to the herd master, pretty much didn't have a clue and they're pretty well starved. She just dumped them back out in the pasture. Of course, the herd rejected them. They've been here a few days and the belly bloat is about half gone. Kids aren't weaned at 8 weeks and, as they grow, if they aren't eating feed, they're most certainly not candidates for weaning. Nannys here don't kick their kids off a teat until at least 14 weeks around here. These 3 orphans looked like road kill possums when they arrived here. Like the good shepard I am, I will do all I can for them.

2 litters of meat rabbit kits were born last week. Also, 34 chicks hatched. 15 in the first batch, 19 3 days ago. Still no chicken house built! I may try to get to it this coming week. I need to pay the first installment of taxes so if there's anything left of the paycheck, I'll do what I can to get it going. Need it quick tho. Chicks are growing and if I just put them out in the barn, I'll be feeding the local wildlife. As it turns out, I was too late to feed the house wildlife. Zone flew out and the kittens played with it. It's now stuck in the heating vent. I am currently working on baiting it out.

A minor slip this weekend, the newborn kid went missing. Saw the baby Saturday morning before I went to work. Sunday, no kid. Monday, no kid. I walked all over the crp looking for where that first time Momma might have left her kid at. Couldn't find it. Tuesday morning and no kid. I resigned myself to accepting it has been eaten by the coyotes. So, I set myself to task on mowing around the barns and cleaning up more of the sons messes. Some friends stopped by for a visit and lookie there, the newborn kid is back! Bopping around the barnlot like it was never gone. Makes me happy and mad, all at once. I'm thrilled the kid is back and obviously okay but mad I couldn't find it. Oh well, whats done is done.

Now, it's pouring rain. So much for more clean up and mowing before work. I didn't get around to building the fence for the corn and melon patch. Need that done asap too. Not going to get built in the pouring rain tho. “Sigh” the last 3 weeks it's rained on my days off. Part of it I guess. I'm going to have to lose some sleep during the work week if I want to get it done any time soon.........
Posted by mmpaints at 11:39 AM 2 comments: